Event promos are a staple of the Pokemon promo world extending all the way back to the earliest days of Pokemon. While most have been bland, a few stand out as highly desirable collectibles. Perhaps no series of the promos is as highly collectible as the 2012-2014 Eeveelution Promos.

What are the Eeveelution Event Promos? 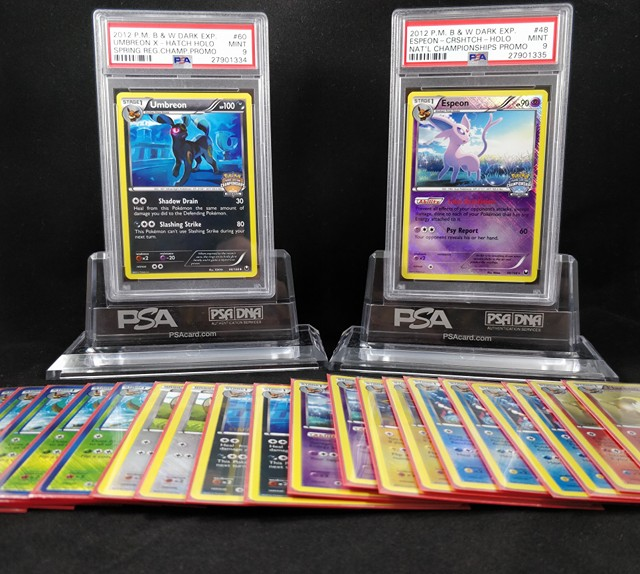 During the 2012-2013 and beginning of the 2013-2014 competitive seasons, Eeveelutions were the promo of choice for all types of events. City Championships, the now-defunct event type that functioned as a step up from League Challenges and a step down from States, featured the Eevee while the evolved forms graced Regionals, State/Province/Territory, and National tournaments. Fitting, given this made Eevees the most common/easily obtained promos and the evolved forms harder, more specialized acquisitions. The full list of the available promos is:

How were these distributed? 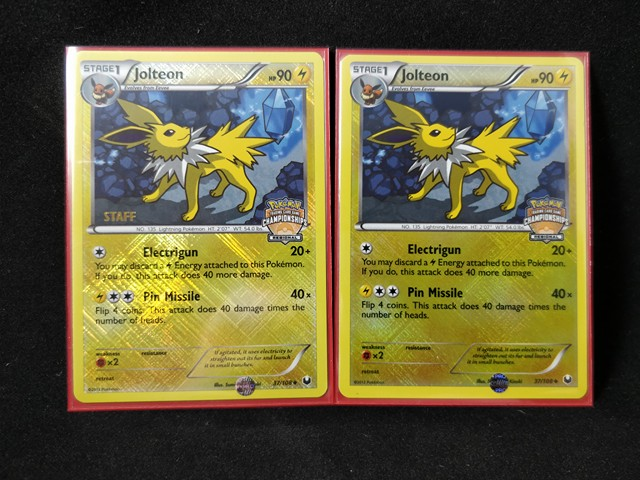 Regular promos were given to every official competitor that played in the events as a part of their paid entry. STAFF copies were given to each person that worked for the event including runners, judges, and in some cases volunteers. This is a fairly standard distribution for event promos and likely comes as no surprise. What was unique to these promos is that they were the first event promos to have a designated version for the European Regional Championships that was entirely unique. 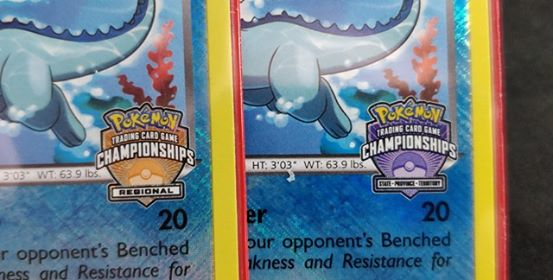 Prior to the elimination of State/Province/Territory championships, North American Regionals were a supplement and fewer in number while Europe had only Regional Championships in between its smallest tournaments and National tournaments. Pokemon created unique promos twice that differentiated between the two. Vaporeon and Leafeon both have two unique variations corresponding in print with this difference and in release with the strict continental divide. How rare are these promos?

The Eeveelution event promos are and are not rare. City Championships Eevee is very common with its competitor and staff versions both being available for cheap pick-up online. This has been the case since they were released. City Championships had dozens of locations for combined thousands of promotional cards released. But they aren’t all this common. Promos like the Jolteon and Flareon often have no available copies online and have decreased dramatically in market prevalence over the last two years. STAFF versions of most of the Eeveelution promos have gone from a consistent 2-5 copies on eBay at any given point to a rare 1-2 listed every few months. 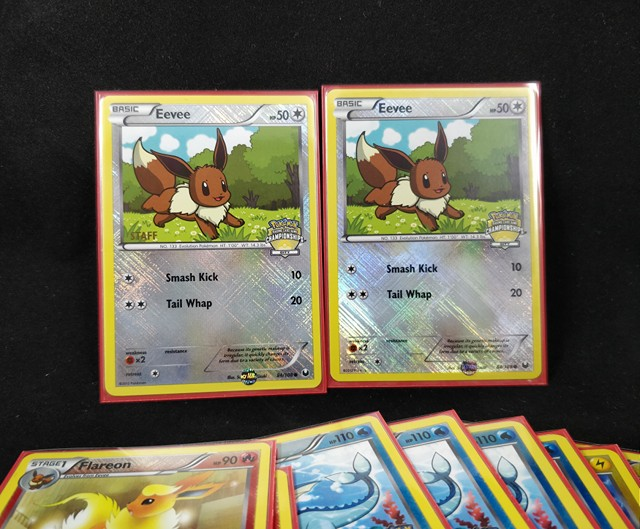 In addition to the rarity being affected by raw distribution variations, the popularity of the different versions is obvious in their price and availability. The least frequent occurrence is by Umbreon, which was highly sought after on release, even though it likely has more total copies than the Nationals Espeon, the lowest print run of any of the Eeveelution cards. These persisting differences in variation have already affected price but will likely have a long-term cumulative effect on the availability of the cards overall.

The rarest forms of the Eeveelution Event promos are the European Regional variants. At the time of release, Europe had a very small tournament circuit with a fraction of the attendance that North American events had. Additionally, Europe scheduled fewer total events of each type than North America. This means that orange stamp Vaporeon and Leafeon make the rarest cards in the set. And it shows. Leafeon copies periodically crop up in the 2-5 GBP range on European sites but hardly ever appear for sale within North America. STAFF Regionals Leafeon earn $50+ per copy regularly and can be a daunting acquisition without constant effort over several months of time.

Regionals Vaporeon takes the cake as the rarest card in this series. Regular copies have earned as much as $50 per copy and STAFF versions aren’t available. Period. While the demand for the set remains niche, thus keeping the cap on the prices within reason, down the line I anticipate the STAFF Regionals Vaporeon may very well prove to be a card worth hundreds of dollars per copy.

The biggest challenge with collecting these cards is that most people today that are interested in rare, niche sets want to grade them. In general, these types of promos don’t grade well. They are sent to the events with very little protection. Cello wrap and other cards is all that keeps the middle copies protected in the event kits. In addition to the natural wear and tear these face, most copies of the cards are produced with a small lip at the corner. This is especially true of the Regionals Vaporeon and Regionals Leafeon. That doesn’t make the coveted PSA 10 designation impossible but it does make it unlikely. In general, this is a set where people will likely have to settle for some 9s. 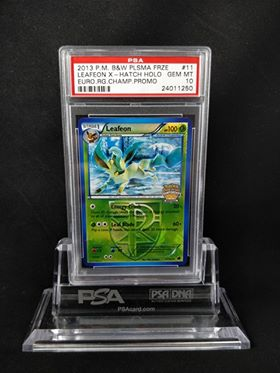 The Future is Bright

Overall, this set is likely to be one of the cooler promo series to come out of the English collecting world. The market has been thinning for years and we are entering the last short period of consistent availability. It is rare for us to get a promo series that has so much going for it. In addition to the amazing artwork, these cards have the advantages of release over time, strictly limited distribution windows, low relative print runs, STAFF versions, and location-dependent releases stretching two continents. The Eeveelution event promos have everything a collector could want. The tasteful, but not impossible, chase is just plain fun and I encourage anyone who enjoys collecting and wants a break from the redundancy of expansion sets to hop on board and give this set a place in your own collection.