“What is your Holy Grail card?”

If you frequent online trading card communities, you’ve seen this conversation starter a million times. If you could have any card, what would it be? These conversations make a great metric for how big people can dream. The PSA 10 1st Edition Base Set Charizard and Pikachu Illustrator are cards that almost always make an appearance in the conversation. But after you scroll through the pie in the sky, you’ll see other cards pop up. Cards in the $1000-$5000 range. Cards that the commenters aren’t just dreaming about--these are the cards people are very seriously working toward.


More than ever, the cards that people rank at the top of their “wants list” are minor trophies. Mysterious Pearl, Victory Ring, Master’s Key. These cards are making their first appearances in buy lists, and, after anywhere from 10-15 years of availability, online sales sites are increasingly barren for them. We are looking at a class of cards with a heap of dead canaries that say they’re on the move. 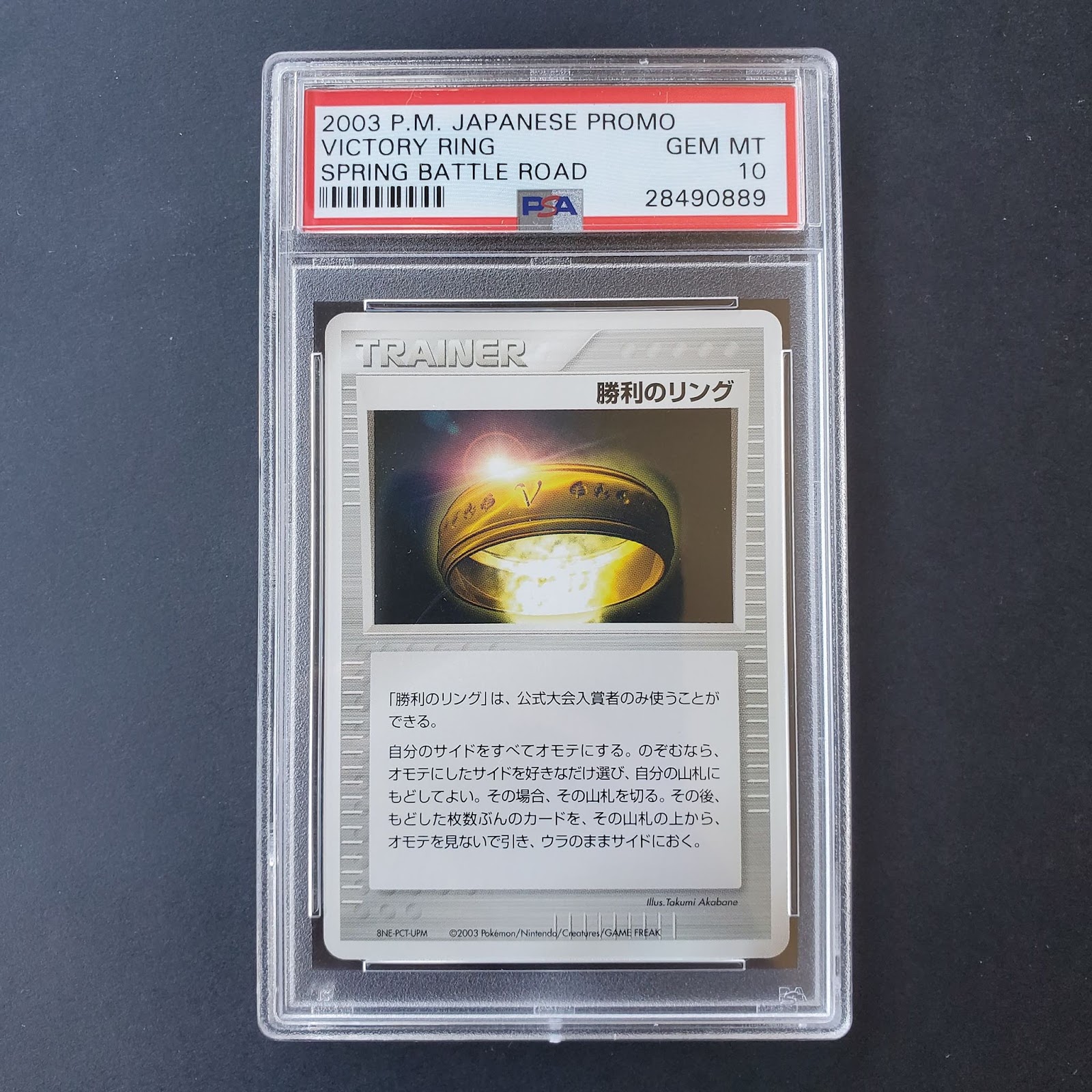 To be clear: What IS a minor trophy? The term "trophy card” is used in the Pokemon collecting world to describe cards awarded as placement prizes (not participation prizes) in major competitions. Most of these competitions are tournaments, though some are official illustration contests. The first recognized trophy cards include 1st, 2nd, and 3rd place awards at the 1997 and 1998 Official Tournaments, the Tropical Mega Battle, the Super Secret Battle, and the 1997 CoroCoro Comic Illustration Contest. This class of original trophies was, for many years, the only group of cards “trophy card” referred to. But over time, more and more trophies fit the definition. Battle Road tournaments put out trophy cards, the official World Championships began giving trophies, and more contests were continually held in Japan and abroad.

As we reflect back on trophies over the last 20 years, that original class of trophies maintains a strong, independent identity. Their prices move together and their appeal is firmly locked into each other. In a lot of ways, the distinction between major and minor trophies--or even trophies as a whole--is just the result of how we talk about them rather than an inherent distinction in the cards themselves. The inclusion of the Illustrator as a major trophy, for example, is non-negotiable for most serious collectors. But at the same time, this means that the very origins of the “trophy card” distinction are muddy. Despite the flexible definitions, consensus is clear. While some people may attempt to stage an argument for a certain card to be included, the first recognized trophy cards listed above have always had a majority opinion in their favor.

This leaves us with the cards that fall outside. Some have higher print runs, like the Mysterious Pearl or Victory Ring. Others, while remaining quite rare, came later in the game and find themselves in the minor trophy category due to their time of release. Wonder Platinum, Miracle Diamond, Pikachu Victory Ring, Master’s Key, and Mew Victory Orb all find themselves with very strong values, notable rarity, and a minor trophy distinction. In this sense, “Minor Trophy” is a catch-all term for the trophy cards that aren’t major. 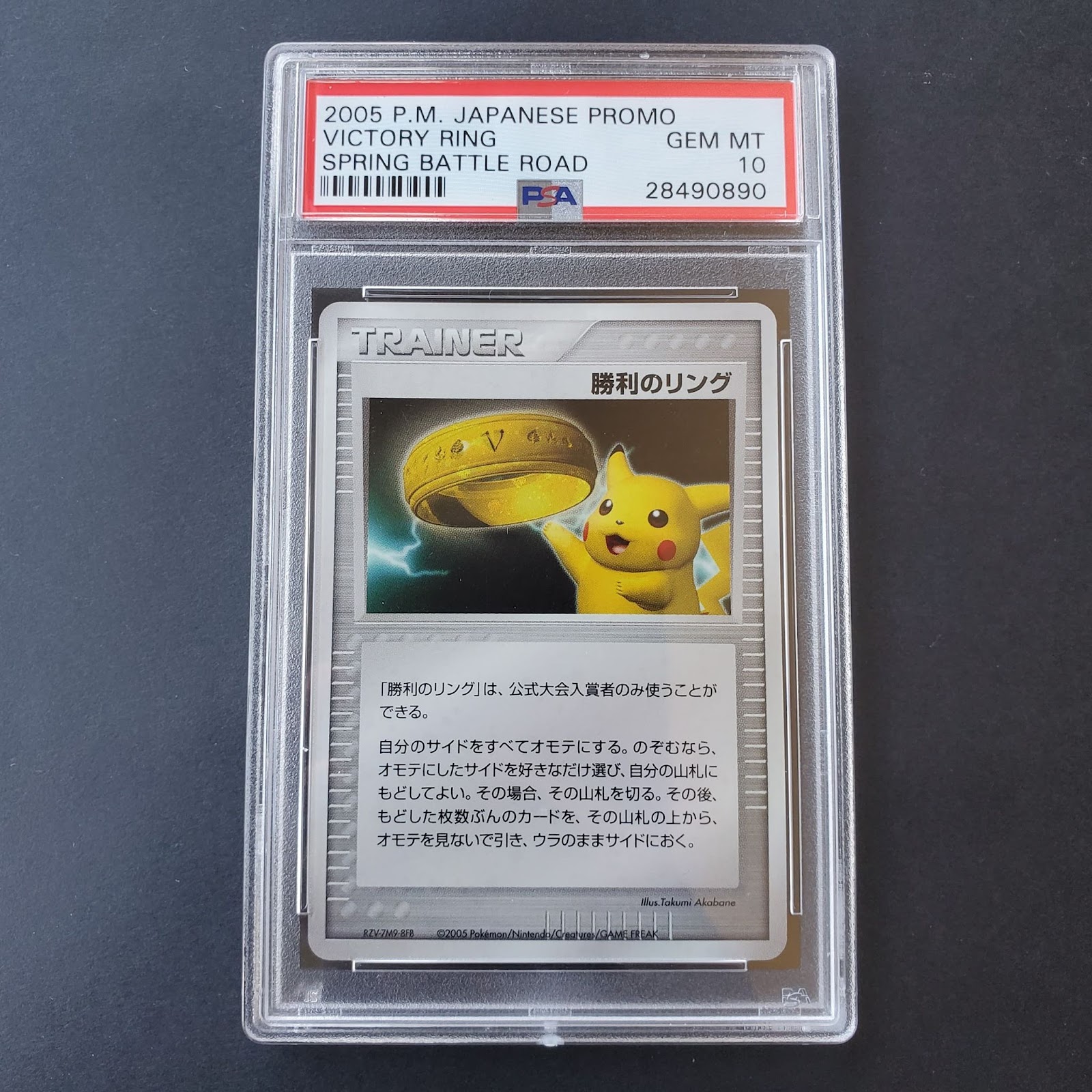 There is one other distinction that has to be made with trophy cards: English trophies are regarded as their own class entirely. They are not historically totally separate. English trophies, which are the trophy Pikachu cards awarded to the top finishers at the Pokemon World Championships from 2004 to present, are spiritual successors to the events that gave birth to such major trophies as the Tropical Mega Battle awards. But the shift in focus to a “Western World” event with global participation makes the trophies unique from the Major and Minor trophies discussed in this article.

It seems crazy to say cards that have long been sought out and desired, with high prices to reflect the interest, are an emerging market. But it takes more than a high price to make a market. The popularity of the cards is critical to understanding what the increased market movement entails. Where previously, most collectors had not heard of a “Master’s Key,” it is increasingly becoming a household name. Collectors that have only been in the hobby for a couple years are encountering more information and talk about these types of cards than they were in the past. This critical step to locking in their popularity can’t be forced. If one person talked constantly about the cards, it wouldn’t increase the popularity and visibility of the cards in the community as a whole. Instead, we are seeing a natural, organic increase in interest in these types of cards that is bubbling up from the ground-level everywhere.

Liquidity and price are, as always, reliable metrics. For Master’s Key alone, the last 5 years has seen PSA 10 copies go from an illiquid, $5K sale to cash-ready buyers waiting for a chance to buy one at $15,000-20,000. Similarly, Mysterious Pearls and Victory Rings were common binder cards that have seen huge growth. The market has shaken out in the same 5 years, taking these from $100-150 binder cards to comfortably four-figure mainstays in gem mint condition. 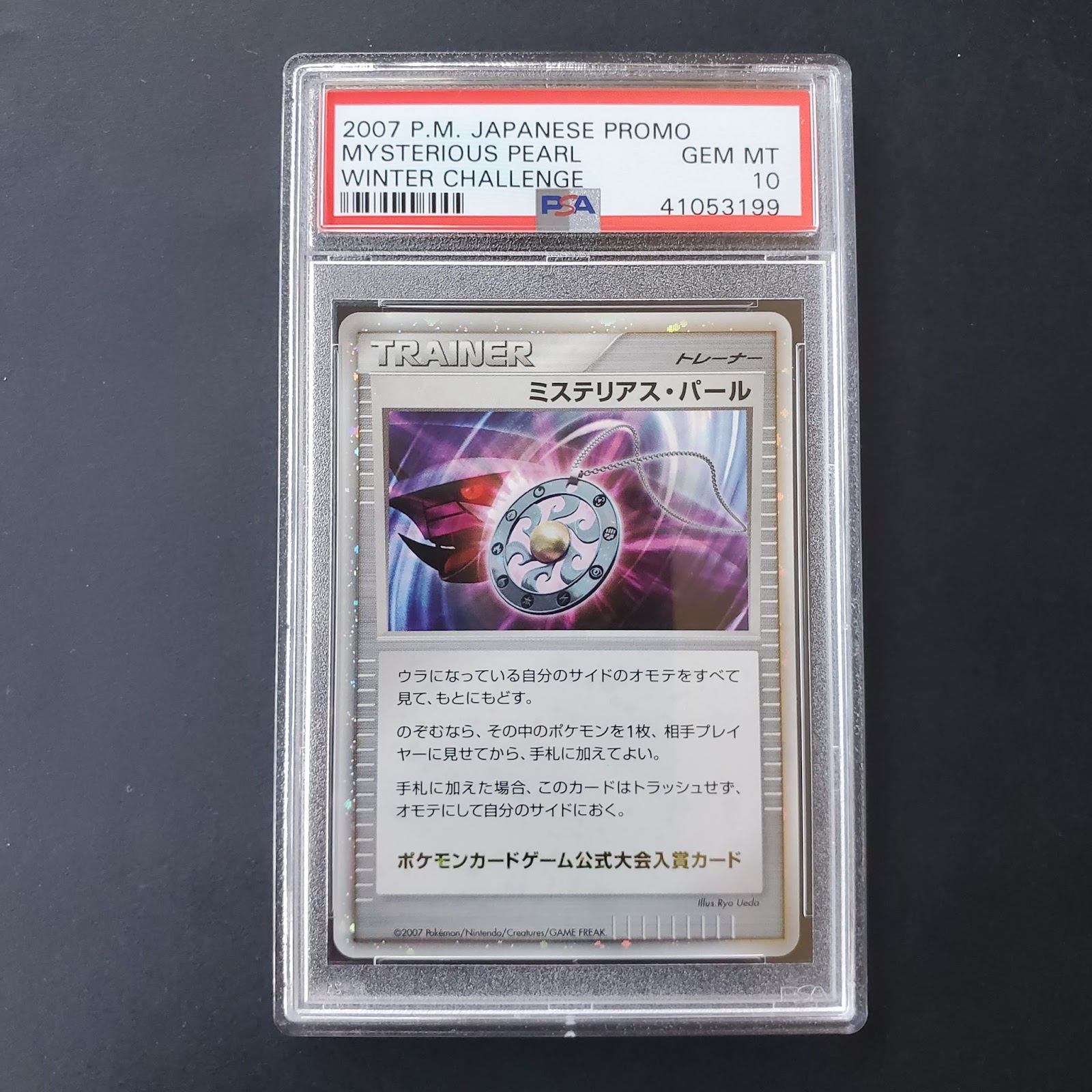 We can also look at the shift in how these types of cards have started to change hands. Previously, you could see online trade threads and stores with these types of minor trophies on hand. People freely swapped them for common production items like gold stars or WotC holos. Then, the common traders and collectors stopped being able to get them. Larger stores and veteran dealers had them, and there was a flow of them onto Japanese sites like Yahoo! Japan (YJ), but getting them required higher risk overseas or tougher bargaining with collectors/holders in the US. Now, even well-known Japanese card stores at the front line of the Japanese TCG scene only see them opportunistically. The rare copy that appears on eBay tends to be an auction with a strong price or a flipper in Japan using vague description details and questionable photos.


Where is the growth coming from?


Minor trophies satisfy a lot of desires in the collecting and investing communities. For collectors, a minor trophy is a chance to own something that has true rarity without having to shell out two year’s average salary for a major trophy. The cards are gorgeous and have the same type of appeal as the highest end cards in the game. The story is enticing, the history is rich, the artwork is enigmatic, and the cards stand out against run-of-the-mill set cards. Minor trophies are promo collecting on steroids. 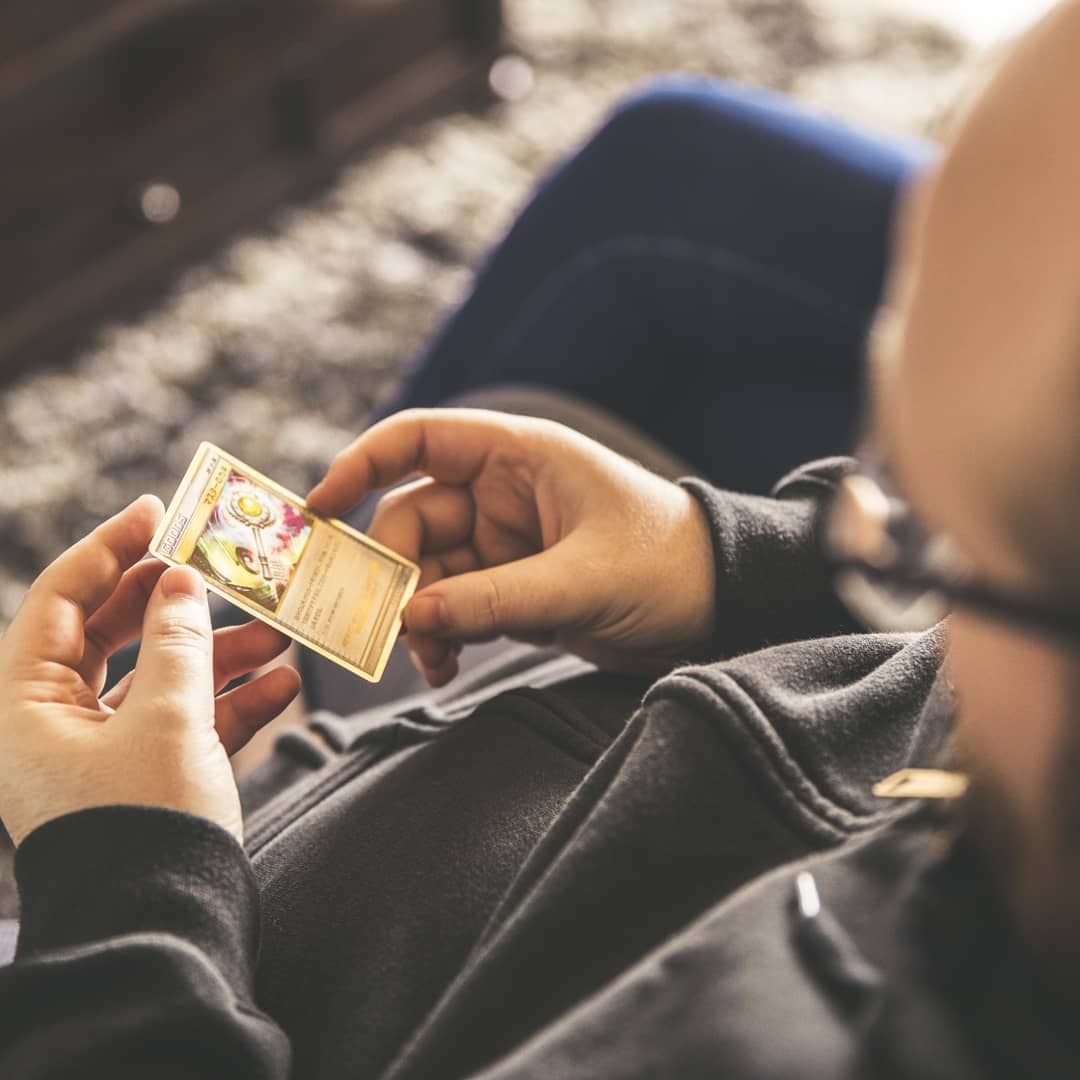 For investors, the appeal is almost exclusively in the rarity. Rarity is the only legitimate investment vehicle in trading cards. It is crucial that more cards aren’t coming onto the market. You need a bubbling interest with under-optimized prices to have any opportunity at all. Minor trophies, despite their growth, remain under-optimized. There has not been a significant economic shakeout in the life of cards that came out in 2010. With the blowout growth in major trophies, investors look to minor trophies with their hopes of riding a similar growth curve. Sure, minor trophies won’t ever catch up to major trophies in price. But as major trophies set new records every couple of years, the minor trophies grow when people look to the next best thing.


But both collectors and investors want the key aspect of trophies that lures in so many: we all want a card that other people can’t have. While set cards can have financial barriers to entry, it is almost always the case that they are available. If you’re willing to pony up the dough or lower your condition expectations, it is rare that there is any set card you can’t have immediately. But trophies are extremely limited. Most are under 100 copies total. And even more common ones still maintain under 1000 copies. Compare this to the millions of cards printed in a standard over-the-counter set and you immediately see where the basis for the prestige lies. The market runs out of copies all the time for truly rare trophy cards. 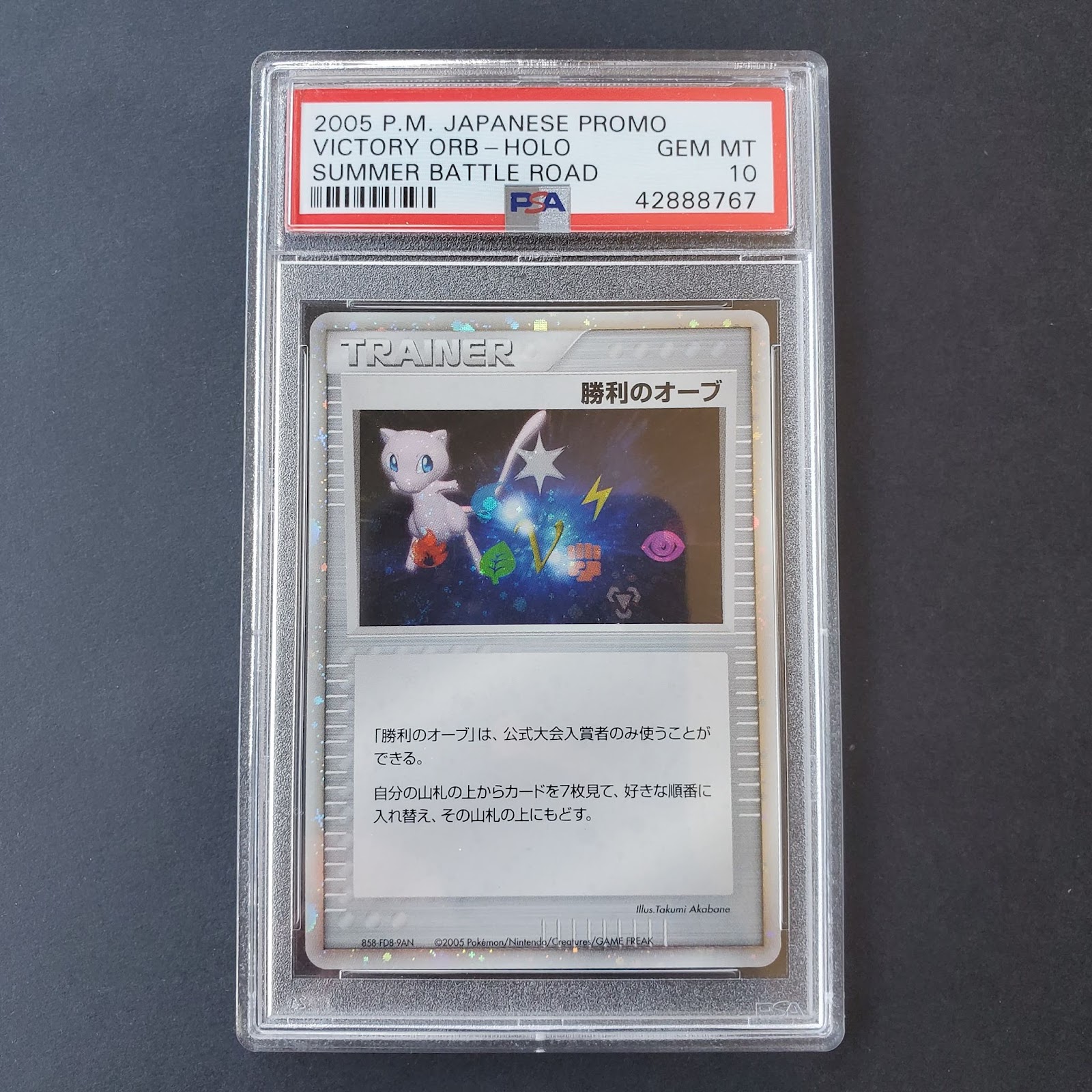 
As major trophies clear new highs for the hobby as a whole, they leave behind value tiers that fill in with minor trophies. It was not until major trophies breached $50,000 that minor trophies started to cross the $10,000 threshold. And when major trophies were making the $10,000 threshold, minor trophies never broke the $2,000 range. The spending power of the collecting community is tied to the income of its 21-35 demographic. But 10 years ago, most of the high end collectors were teens and young adults with their first jobs. As the market highs get higher and new interests are drawn into the market, there becomes more room for minor trophies to thrive. In my opinion, we have already seen the beginning of this trend. And there will continue to be substantial growth as these cards hit 20, 30, and 50 years out from their releases, making them prime space to place our attention as we piece together our own treasure troves.