The holiday has started to wind down and most of us are back to work. The humdrum of life is in full swing and the excitement is beginning to dwindle. In this moment of reflection on the turn of the year, we find the perfect moment to make a true resolution. It is easy to make promises to ourselves at the height of our festivities and joy but it is under these conditions that we will have to carry them out. Resolutions made at the turn of the year are a magical basket of our hopes, dreams, and visions for ourselves. But too often they end in disappointment. Here’s my best advice on avoiding exactly that.

Even if you are working on five different parts of your collection, make your proper resolution one of them. Too often people believe their resolution has to encompass everything they will do over the year. This isn’t the case. Even if you finish your resolution in the first two months you are free to make other goals throughout the year. Picking one goal allows you to scale the goal according to your aspirations and practical limits and makes it more likely that you’ll achieve the goal at all. Being pulled in several directions is a good way to end up with a pocketful of partially-completed checklists. This year, consider settling for the one you care most about.

Speaking of practical limits, don’t set a goal that isn’t going to jive well with your reality. If you are most likely moving in the next 12 months, it probably isn’t wise to make your goal to collect every large plush ever produced. If you don’t have stable employment that you can reasonably say will still be yours in a year, don’t make your goal to spend $10,000 as fast as possible. With the internet echo chamber of “Expensive cards are all that count,” it is easy to lose sight of how collecting has to fit into your everyday life. Make an awesome collection that matches who you are AND where you are at.

One of the biggest hurdles with collecting is narrowing down our interests. We all WANT to have every Pokemon card in existence. Unfortunately, that’s not a very helpful short-term goal. Really narrow down what you want. Maybe that looks like a specific list. Or, maybe you have one set that you want to make a master collection of. For me, being specific is choosing my favorite parts of my collection and keeping them “current” by getting any additions that come out. Whatever specific looks like in the context of your goal, commit to having a clear vision of what it looks like to meet exactly what your dream is. 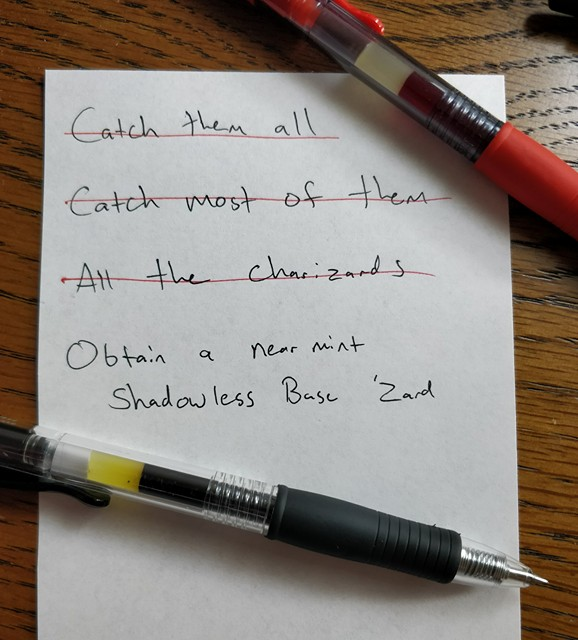 Make a Plan, Not Just a Goal

This point meets halfway between being specific and considering your limitations. A resolution doesn’t specifically imply a plan but having a plan will make carrying through on your resolution significantly easier. If you’re putting X dollars a month into your goal, write that down. If you’re chasing the cards in a specific order, write that down. Keeping tabs on how you intend to pursue your resolution will make it a lot easier to stay on track and you’ll have a path to get back on if you fall off.

It feels like I shouldn’t have to put this but I know I do. Many people struggle with their collections slowly turning into work. If you make your goals such that you’ll be spending money just to fill in tons of small holes or so tedious to keep track of that you’re spending ten hours in spreadsheets for every one hour you spend elsewhere, you’re probably going to fizzle out. Make sure you’re choosing a goal that’s going to be fun to pursue as well as complete. The hunt should be just as fun as the catch!

A great way to make collecting more than just an endless money pit is to choose hard items to get. There are tons of great collectibles that don’t come up every day. If the only challenge to your collection goal is the price tag, you’ll probably lose interest in throwing all your excess money at the goal. Picking goals that require you look for the items over time can make your collecting year a blast.

Not everyone has a perfect vision of what they want. Collecting isn’t just a back and forth of want/get. Collecting is an attitude and a way of behaving. That means collecting can also be done in healthy and unhealthy ways. If you find yourself buying small cards you didn’t really want on impulse often, you might pick a goal of no impulse buying. If you are spending too much money period, make taming the wallet beast your collecting goal. Too often people forget to keep their method and mindset in check. If this resonates with you, consider a behavioral resolution for the 2018 collecting year!

Don’t Forget What You Have

Resolutions naturally put the emphasis on what we don’t have and who we are not. Collecting cannot be an endless grocery list. It has to be a continued goal. Whatever you choose to pursue for your collection in 2018, don’t let it escape the context of what you’ve already accomplished. So when you’re deciding what to do with the long year ahead, pull out that old binder and flip through your acquisitions from 2017, or 2016, or any year when you started to really be involved. Make 2018 about bringing in more of the joy you’ve already experienced. Remember where you were and who you were with. Dream about where you’ll go and who you will meet. Make collecting everything it is intended to be.