We love errors. Well, maybe we just love to hate them. But even if our Facebook status with error cards is set to “It’s complicated,” there is something uniquely thrilling about chasing these extremely hard to find variants. After all, a true Pokemon Master ought to catch ‘em all, no?

Proper error cards are well documented in the Pokemon TCG and extend all the way back through the Wizards of the Coast (WOTC) era. For decades trainers alike have sought out the rarity and entertainment factors in error cards. As the collectibles became increasingly sought after debates began as to what an “error” actually is and which ones count for a master collection. Today, we recognize true, collectible errors to be those cards which have an official variation in their printing. This excludes some of the crazier variations we have seen related to one-off mistakes in the printing process, common ink blots, miscuts, “crimped” cards where a card has been caught in the pack sealing process, and other accidentals that relate to the process by which the card came to be rather than the formally submitted card design itself. This isn’t foolproof. Cards like the “d” Edition Butterfree error from Jungle defy our concept of proper error. The “d” in edition isn’t the typo it appears to be; the “d” is formed by an inkblot! Ubiquity can create demand even within the categories typically written off as production damage, but understanding proper errors still helps as a general trend. 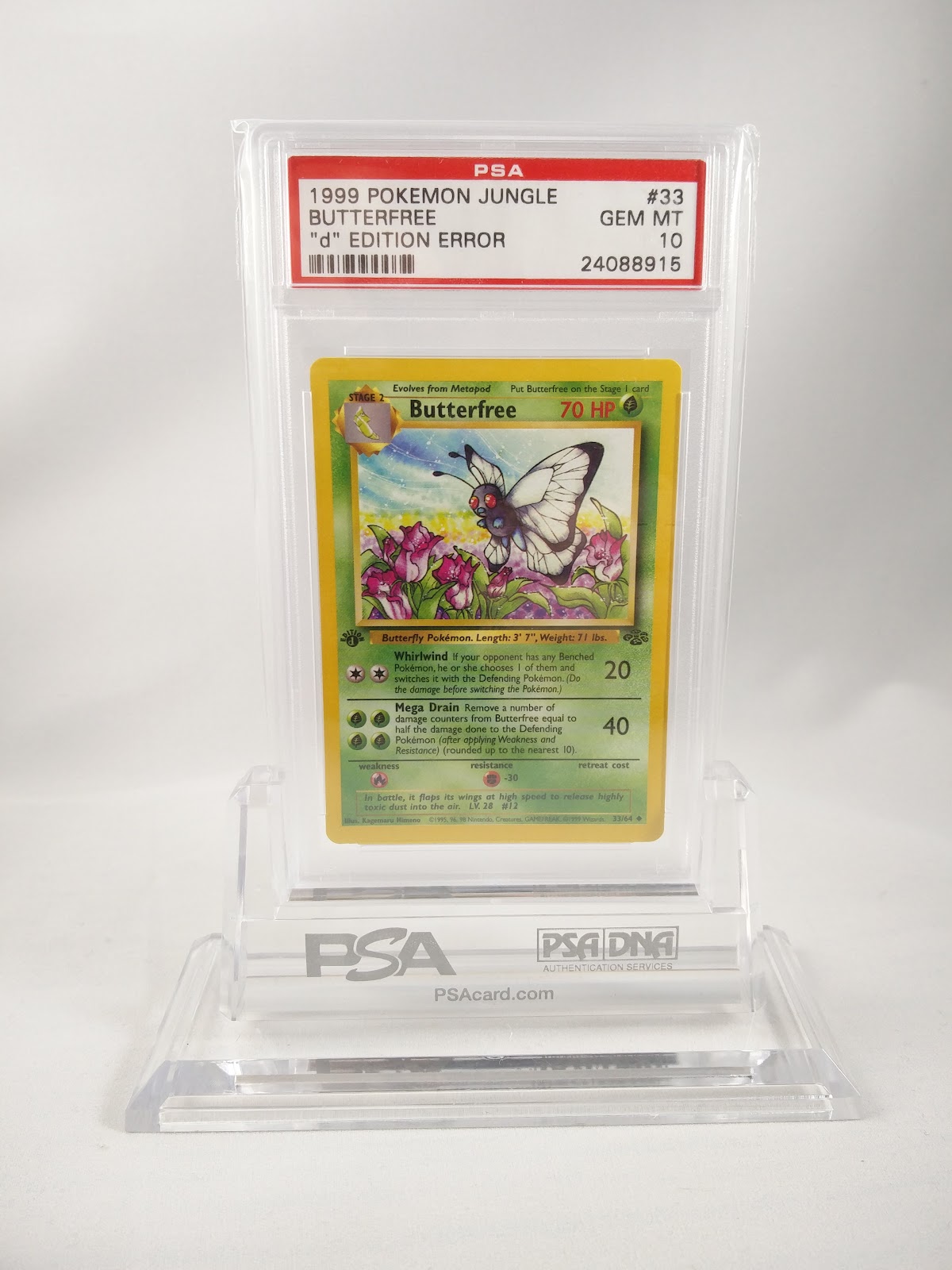 While defining proper errors filters out a lot of the undesirable cards with glorified production damage, there is still a bounteous treasure trove waiting for us collectors to hunt down. Mistakes in stamping, mistakes in spelling, and lacking information all appear in different print runs throughout Pokemon’s TCG history. Old errors tend to hog the attention so let’s focus on the best of the best in modern errors.

Starting with Hoppip might seem like a joke but these errors are difficult to find despite having a large print run of both the error and corrected version. When you look at the cards, the error should be immediately obvious. 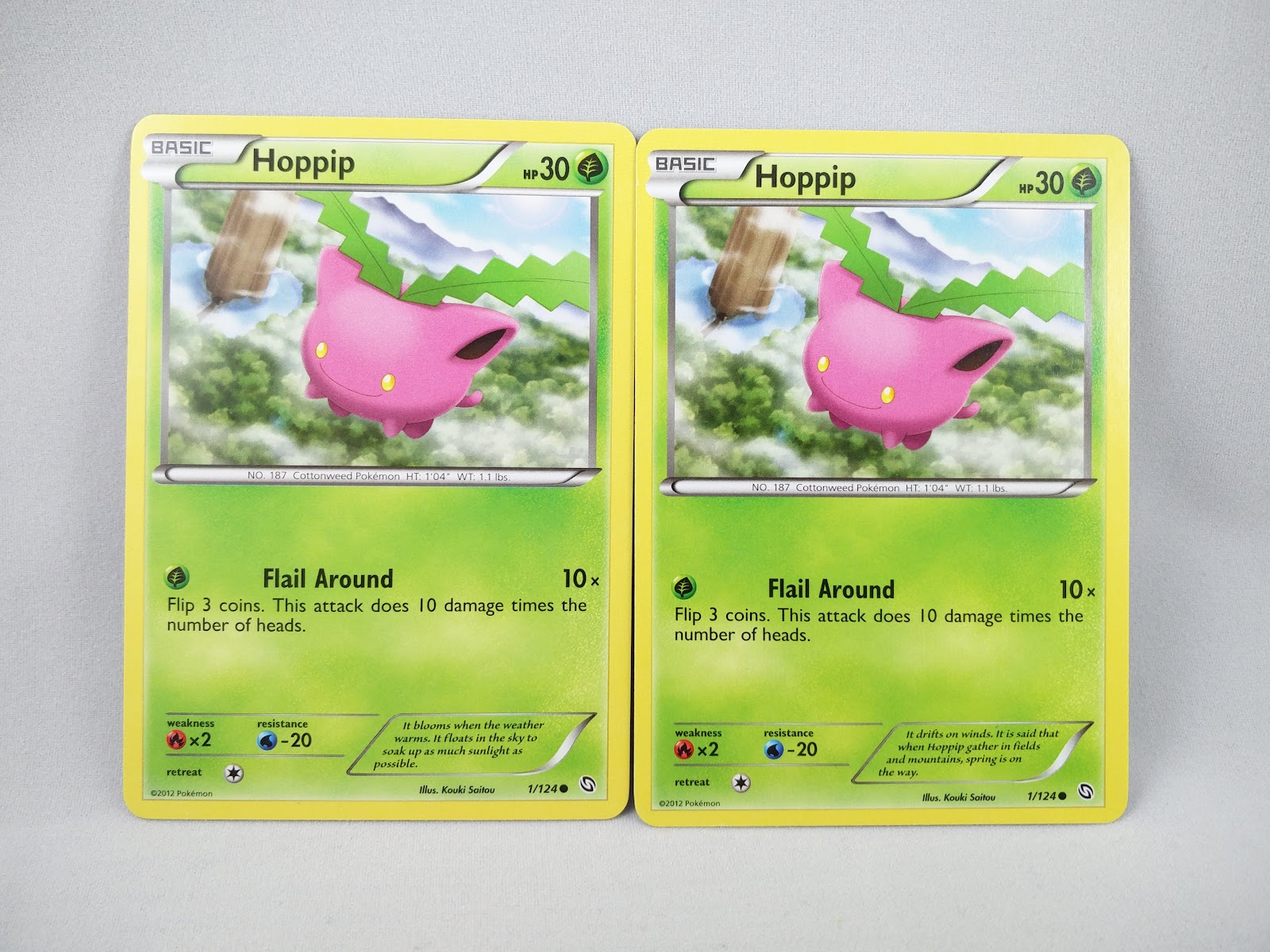 Don’t see it? Don’t worry. Neither did most collectors. This error is actually one of the hardest to spot because it appears in an often overlooked portion of the card: the pokedex info! In fact, the error blurb (left in photo) isn’t Hoppip at all! It is the Black and White pokedex entry for Skiploom. That difficulty to spot makes this one of the harder error promos to obtain today. But good news: because it’s a common card, the price has remained lower than errors of higher rarities. And you can even pick it up in Reverse Holo! 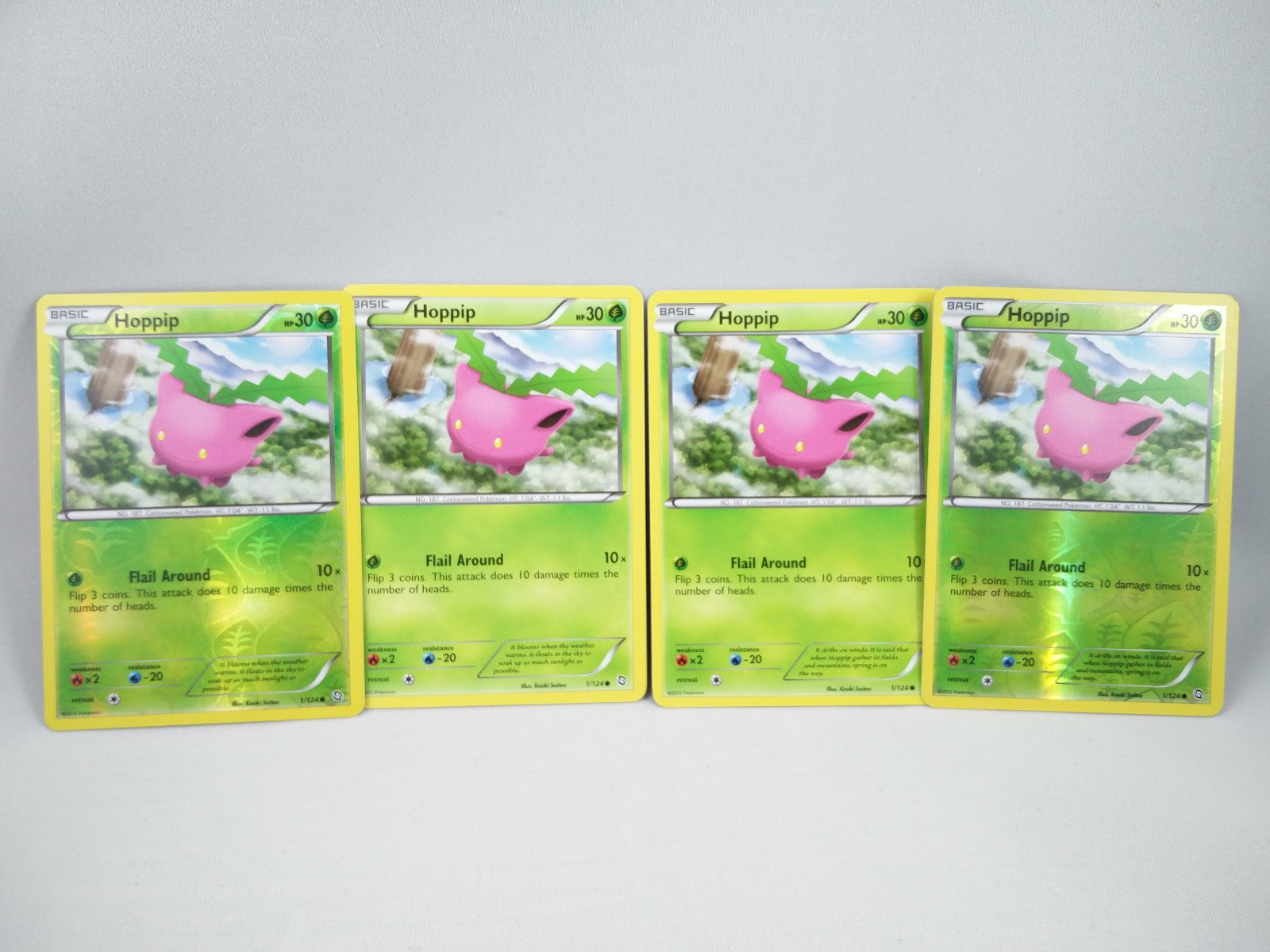 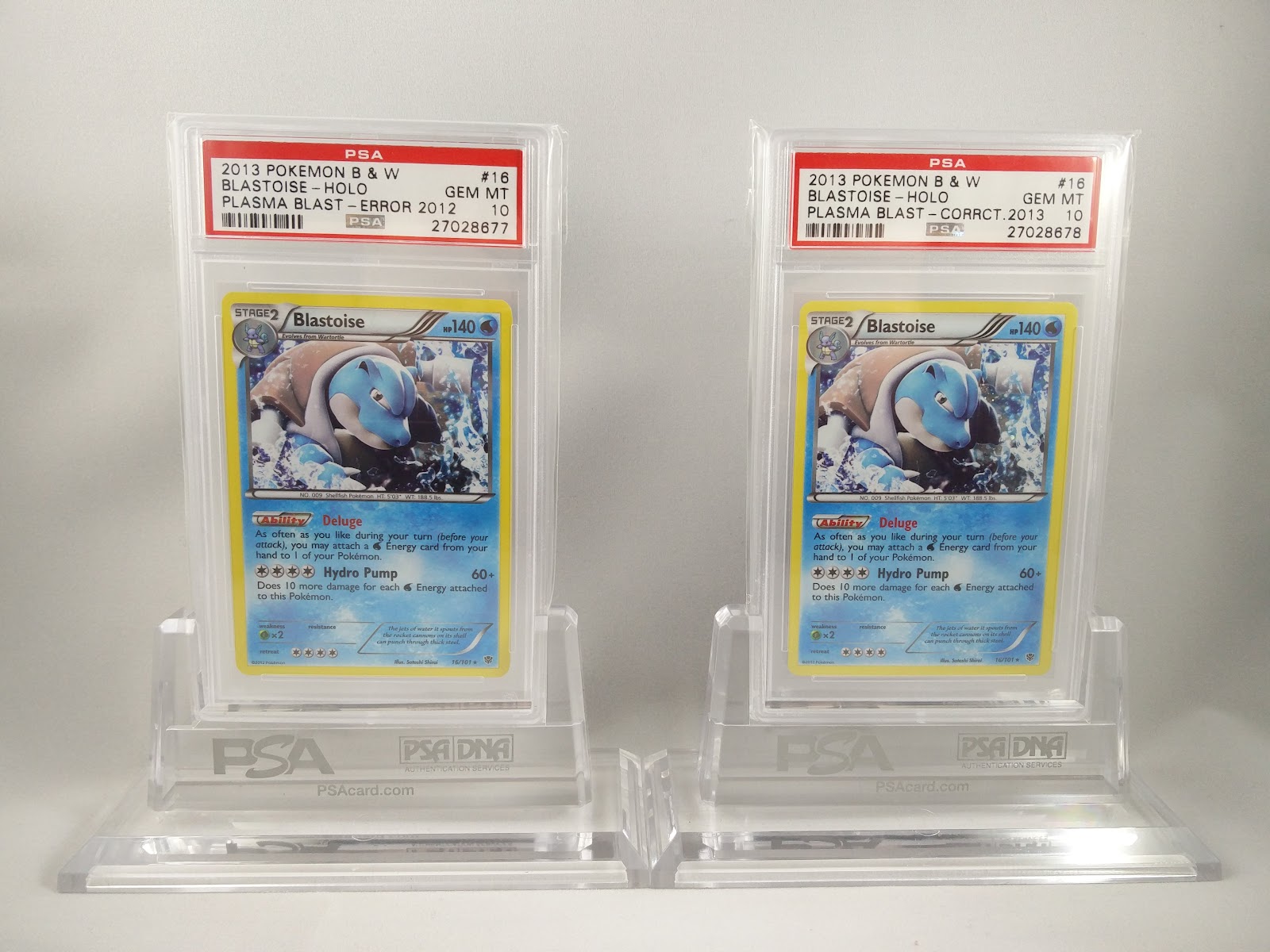 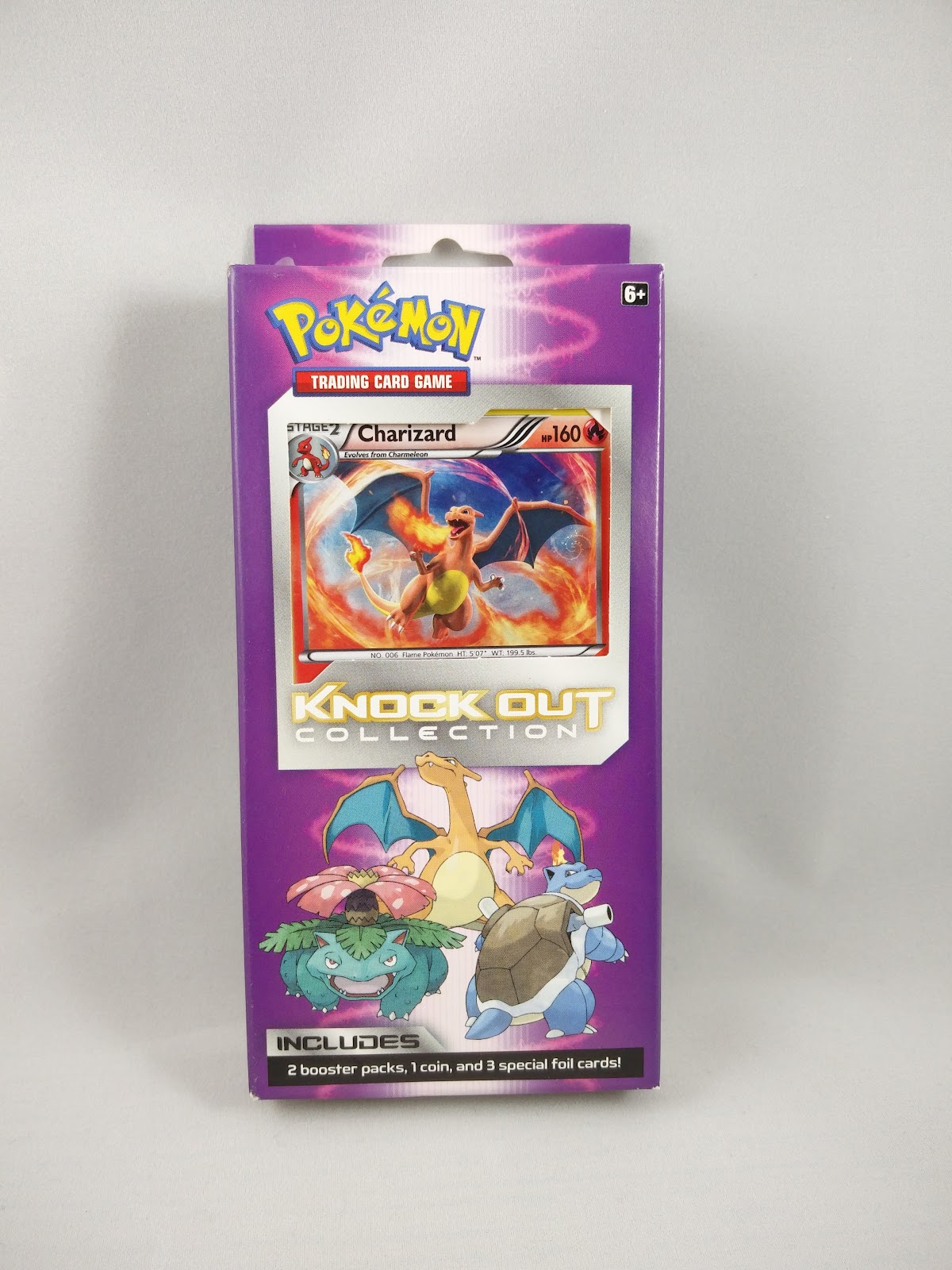 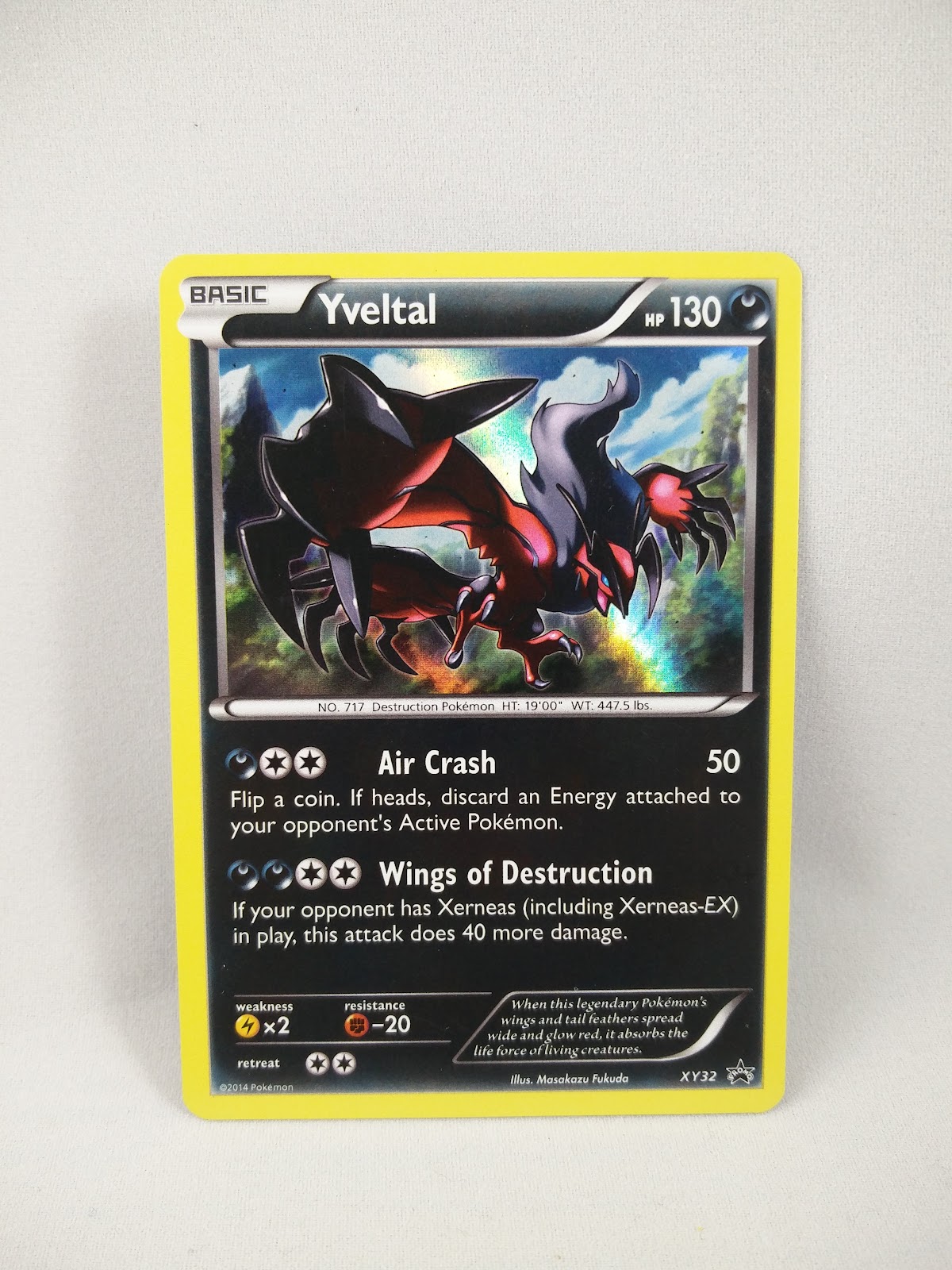 We’re now transitioning into the last two I’ll cover here. These are also my favorites. First, notice anything missing on this Yveltal? Wings of Destruction sure takes a lot of energy to do no damage! For an extremely small number of the Yveltal that came from the Xerneas vs Yveltal Battle Arena Decks, there is no attack damage for the second attack printed. This error is simple but absurdly rare. We can’t know for sure exactly how many were printed, but the combination of being put in a product that isn’t popular with engaged collectors or players and having no obvious regional concentration has made these a bear to find. If you’re going out Yveltal error hunting, you’ve got one advantage over the PLB Blastoise: these errors are visible from the outside of the product. 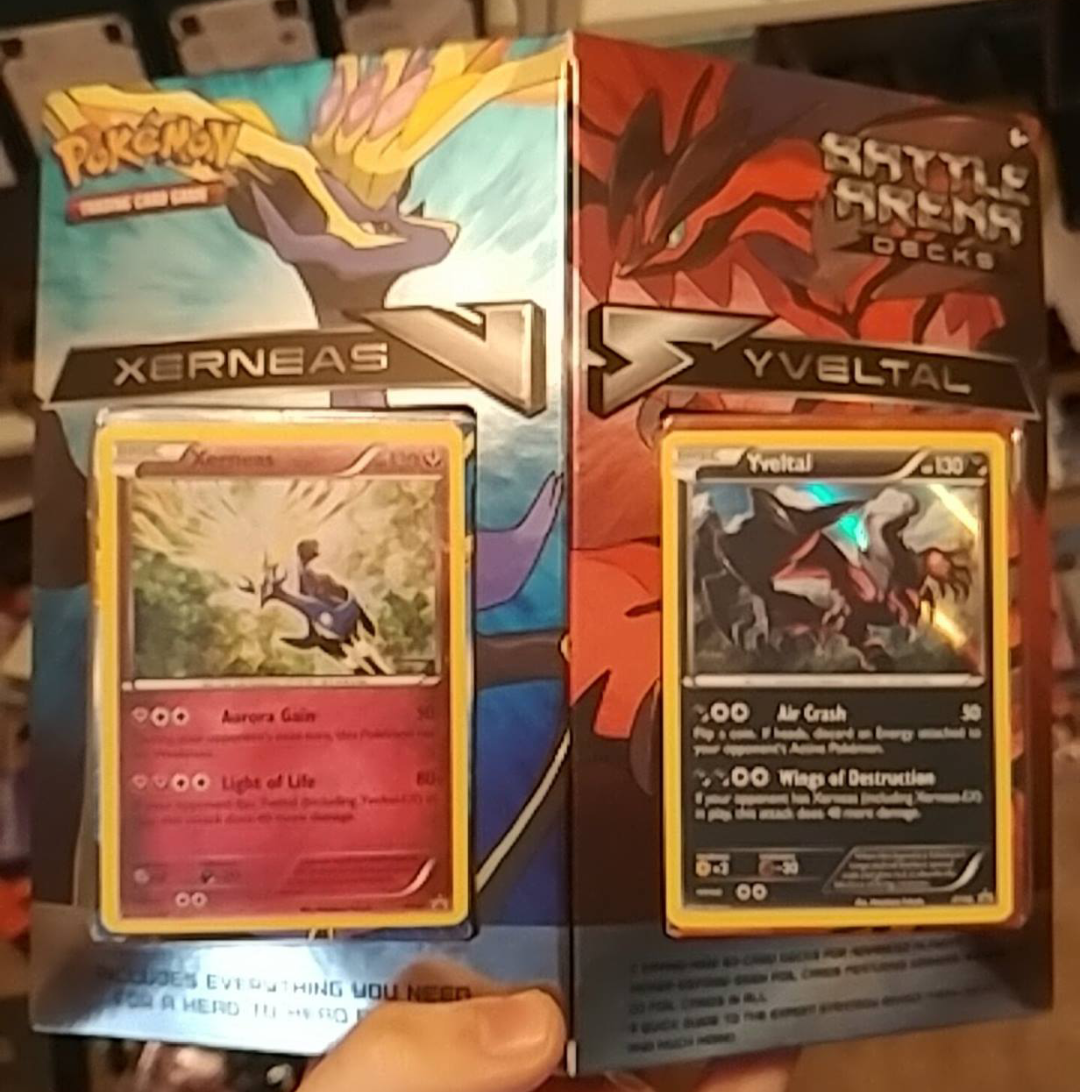 You’ve probably noticed a theme with some of the error cards. If they come in a product other than packs/boxes, they’re probably not easy to find. The lower you get on the ladder of desirability for a product, the harder an error will be to obtain from it if an error printing occurs. The laughing stock of Pokemon products for the last decade has been theme decks. But if you’re a high end error collector, Roaring Skies forced you to care. Welcome: Stage Error Dragonite. Hidden inside a wildly small number of Storm Rider Theme Decks, the Stage Error Dragonite boasts a false “Stage 1” in the top left of the artwork. While the Yveltal error has earned a higher price in the short run, the Dragonite is almost certainly the hardest to obtain of all the modern errors. The only thing Dragonite and Yveltal have in common in terms of rarity is zero copies on the market. The Storm Rider theme deck displays a Zapdos holo variant that is common and has little to no extra value over its set-release counterpart. As such, opening theme decks trying to get the error Dragonite is costly and unrewarding. Your best bet is to simply wait and hope someone comes along. Or, there’s the capitalist trick of the trade: offer so high that one comes out. 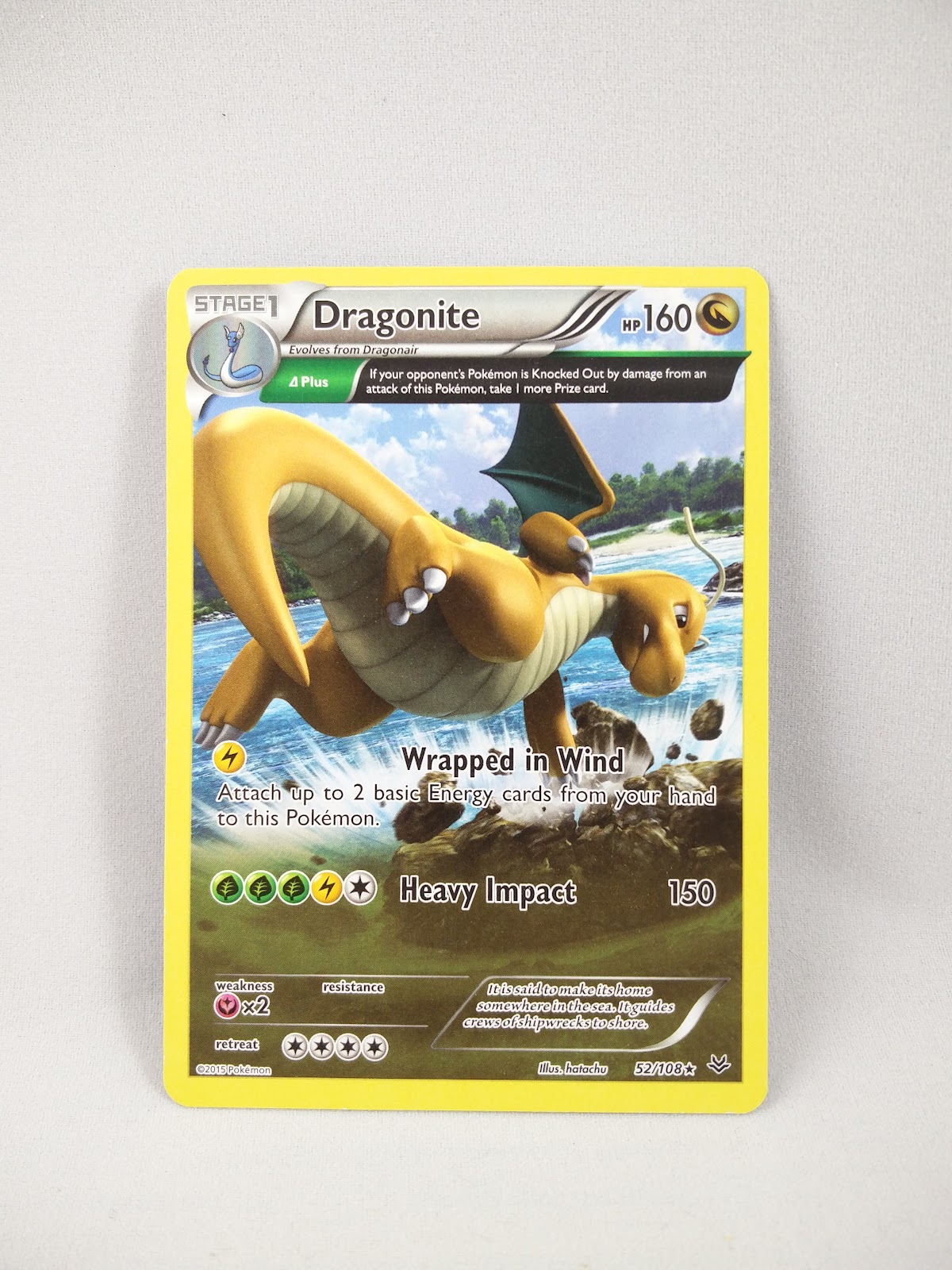 Whatever your intentions with collecting modern errors, one thing is for sure: The longer you wait, the lower your chances. While early WOTC errors prove to come up twenty years later regularly, the modern errors are disappearing almost as fast as we become aware of them. Modern error collecting isn’t for everyone due to the prices on the best and the rarest but everyone should be aware of which errors are out there. You never know when you’ll run into one and strike gold! Knowledge will always be the most valuable collectable.