If you heard the story of the English Championship Arena from any other source, you probably wouldn’t believe it. I can’t say I blame you. What makes the card so rare? Why is it so hard to find mint copies? How was the card even released? Let’s lay the history out and get this set in stone. 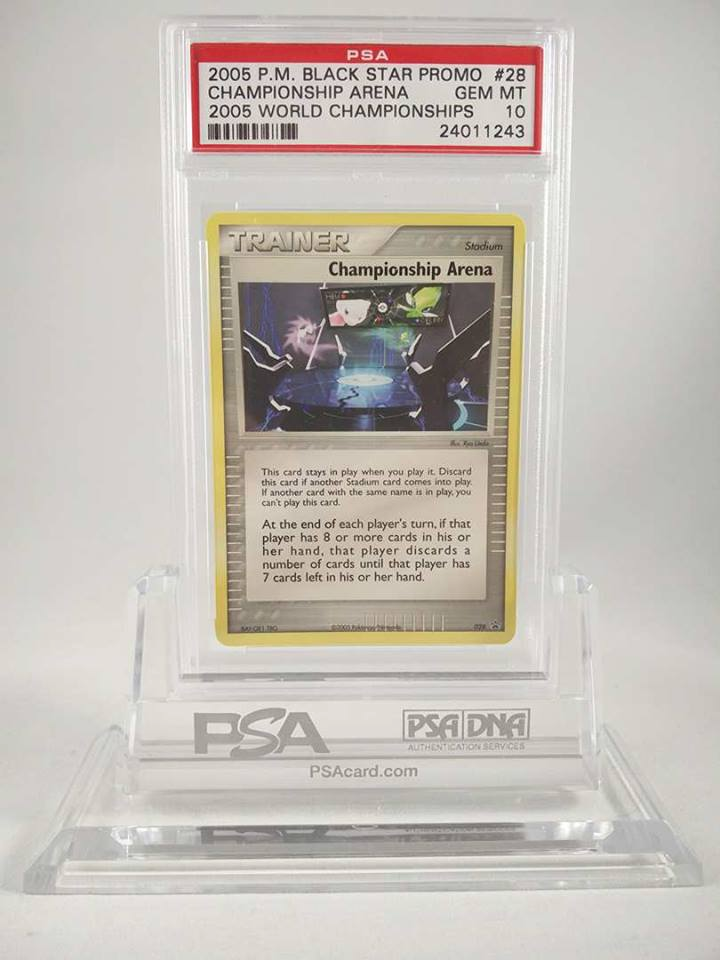 Where does this card come from?

In 2005, at the Pokemon TCG World Championships, the staff wanted to do something extra nice for participants. Championship Arena was provided in English to the tournament organizer to be distributed to all of the eligible competitors. In addition to the card itself, each participant was to receive a small booklet mew booklet that held the card and read, “Congratulations on reaching the Pokemon TCG World Championships! The commemorative card is your keepsake to remember this special event.” 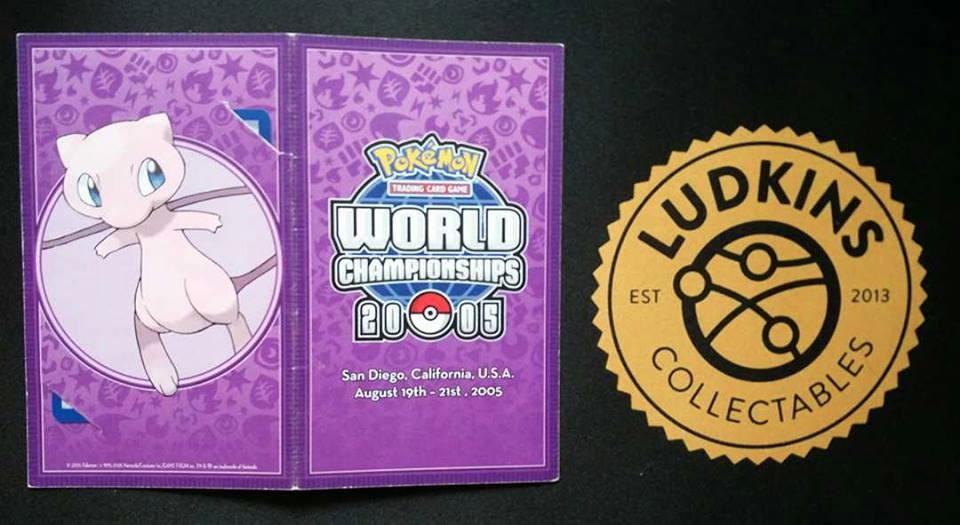 While the idea of a special commemorative card being released in addition to the traditional event promos is undeniably awesome, that's not the primary factor in the condition and marketplace variability. In order to surprise the competitors, the booklets containing their cards were slipped under their hotel doors. The idea was that they would wake up to an awesome new card in the morning. There were only a few problems:

-There was no official list of competitor hotel rooms

-Some rooms that received cards were not competitors

Woops! While everything that could be done to make things right in the end was pursued by event staff, this was the last time this method of distribution was ever used. In fact, the English Championship Arena is the only commemorative worlds card in existence.

Why do conditions vary so much?

In addition to the under-the-door distribution I’ve described, the Championship Arena faces one other major setback. The booklets that contain the cards damage them when pressure is applied. Many were probably damaged before competitors even got them. Today, it is almost impossible to find a copy that does not have indents on the top left and bottom right corners. Study the images below and you’ll see exactly what I mean. 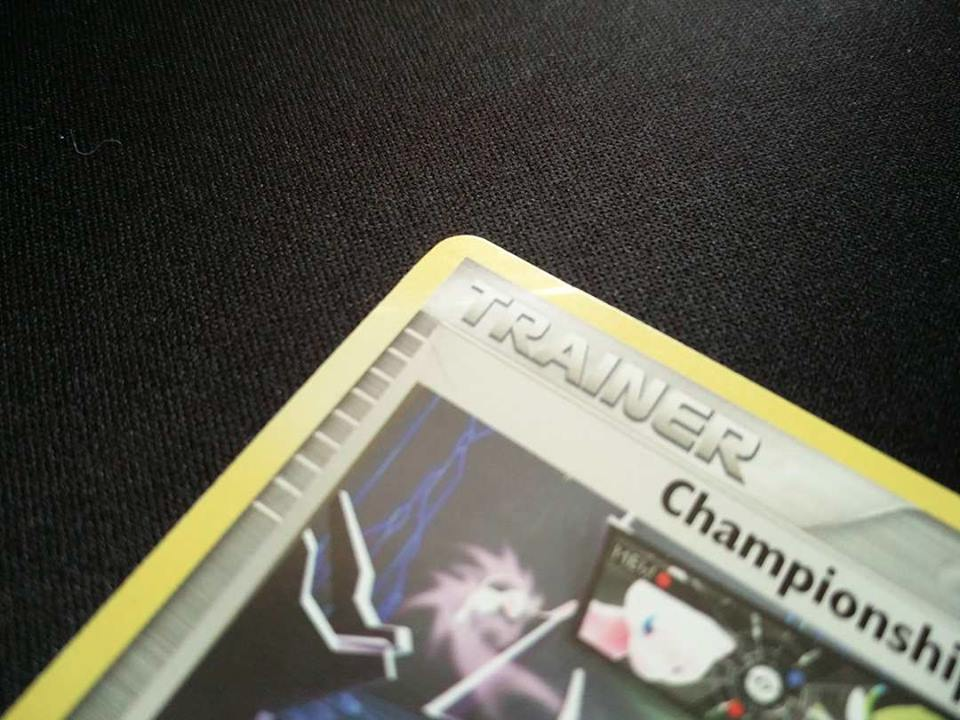 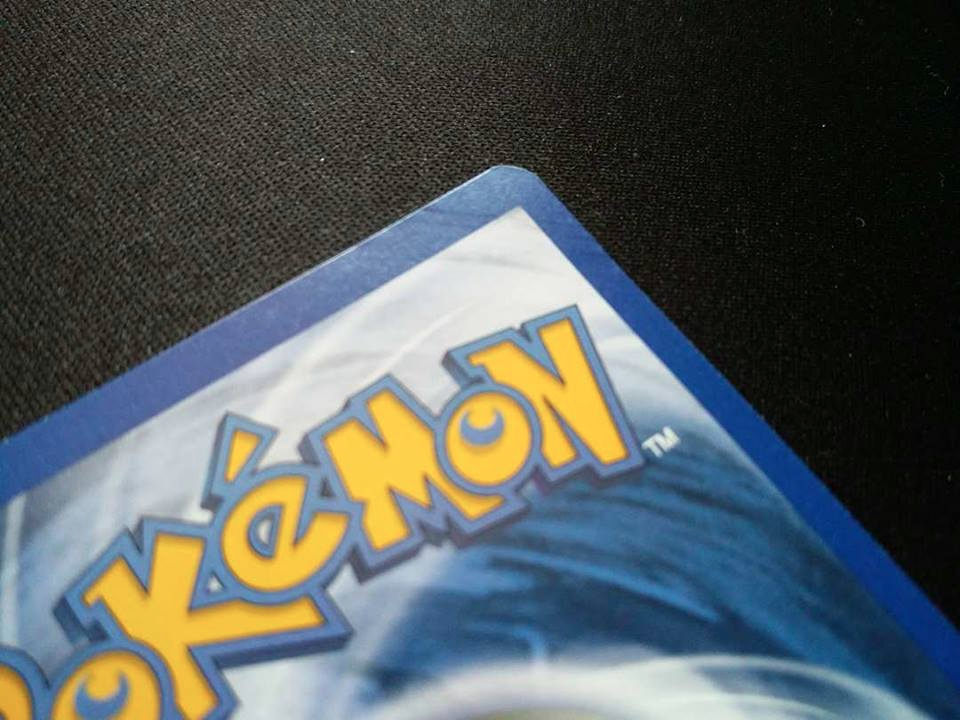 While some people are willing to write off the damage as historically accurate, the sticklers out there are not going to settle for the damage present on a large majority of the cards. What’s certain is that the number of mint copies is unusually low for this card. Taking care of the card was not sufficient to protect against damage (as is usually the case), which means getting the card raw and turning it into a PSA 10 copy is an uphill battle. As of posting this article, only three copies have ever earned a 10. 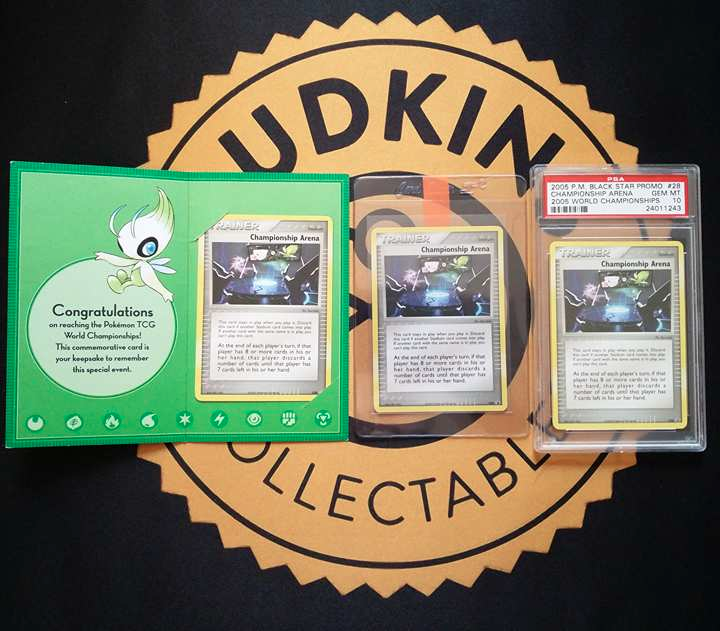 Why are they so hard to find?

With a card that is notoriously damaged, it might make sense that there would regularly be indented copies for sale. The reality: it’s extremely rare to even find a heavily played copy. The English Championship Arena has several factors underlying its extreme rarity. First, it is a numbered black star promo. There is no common variant of the Championship Arena, meaning you can’t cop out to finish a master set. If you’re going to put together a true master set of black star promos, Nintendo promos, or even worlds sets, you have to bite the bullet and invest in the card. At this point in time, that’s going to involve laying down a mammoth wad of cash. Indented copies sell regularly in excess of $700, depending on market availability. This is a direct result of the high demand and low supply. Add on top of all this the time (over a decade now) since it was released, and collectors are in for a real hunt. The good news? The value has never gone down. Not even once. The cards climbed from an initial price of over $100 to $200 within a few years. They hit $400-500 range in approximately 2010 and stayed there through 2014. In 2015, almost no copies sold until the end when sales started to happen in the $700 range. In my opinion, the price is overdue for a four-figure evaluation. No PSA 10 copy has ever sold and only two have ever been listed. The first was taken down almost as soon as it was put up and the second has been unpurchased its entire life. It remains listed on eBay at $30,000 USD. While this price is currently unrealistic, the lack of sales makes it a seller’s market.

At the end of the day, the Championship Arena remains one of the highest priced and most desirable promo cards in existence. It is the apple of any English card collector’s eye. As an investment, it remains safe. As a collectible, it remains unparalleled. Very few cards have as cool a story behind them. This card embodies the historic chaos that characterized the early Nintendo-era of the Pokemon TCG, and the incredible mew and celebi artwork emblazoned across the front is only one of many reasons this card is legendary.