If you know me, you know I’ve been going on for a few months now about PSA 10 1st Edition Team Rocket holos. I’m putting myself out on a limb by saying something is definitely going to happen but I stand by my prediction: PSA 10 1st Edition Team Rocket holos are due for a price overhaul. In stating that, I accept that I’m either going to be given doctoral robes for an accurate call or a tin foil cap for being crazy. But my money is where my mouth is so let’s look into why this set is on the verge of greatness while we blast High School Musical’s “Start of Something New.” 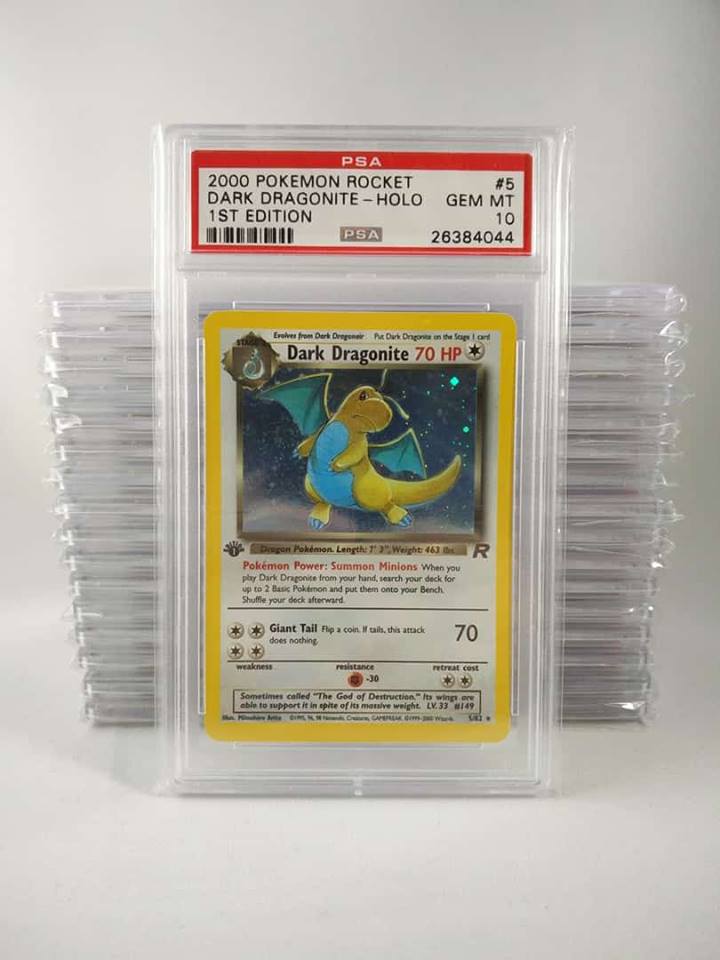 “Woah, slow down there, Charlie. What are you saying?”

With the uptick in interest in original Wizards of the Coast sets, and the holos in particular, we can’t expect to enjoy the prices we’ve known during this late 2014- early 2017 era. For a typical collector, the prices might seem high on these products already. That is not the case. WoTC sets aren’t just old sets. They’re the first sets, the most nostalgic sets, and the most likely cards to be damaged by this point in time. WoTC cards precede the popularity of grading making it more likely that they were damaged before they made it into cases.

But even within the WoTC realm, Team Rocket hasn’t really blossomed. The set is incredibly cool and features some of the first new artworks for the most popular pokemon that had been printed by that time. The cards are attractive in a new way. Where the artwork and feel of Jungle and Fossil serves primarily as an expansion of base set, Team Rocket feels entirely new. Team Rocket is a conceptual launching board into the Neo era. Everything about Team Rocket is right except the prices.

Until now, the abundance of boxes on the market has made it possible for people to grade their own Team Rocket holos relatively cheaply. Those days are coming to a close. The advent of the Pokemon craze on YouTube in approximately 2015 saw sealed boxes systematically depleted from the once-abundant online reserve. Fossil and Jungle boxes shot up in price. The e-reader series, which had a higher relative scarcity to start with, have evaporated. Most original ex-era boxes are virtually non-existent on the secondary market. Oddly enough, until now, Team Rocket has not been as deeply affected. There’s been an increase in price, no doubt, but the holos remained cheap in gem mint condition and the boxes never really topped the $600 mark. That is changing.

As of this article, 1st Edition sealed boxes are comfortably at $700. Where there used to be 20 boxes on eBay at any given time there are now 10. I predict the boxes will breach $1000 before long. This will push people toward already graded holos more so than before. The current holos are starting to dry up as a precursor to this effect. PSA 10 1st Edition Dark Charizard holos were consistently $225-250 for almost three years. I held off on posting this so I could include the sales price of last night’s PWCC auction for the card: $407.00. Between October 2016 and May 2017 I purchased eight PSA 10 1st Edition Dark Gyarados holos between $35 and $50 each. You’re now lucky to find one under $100. The singles market on these isn’t inflating or being bought out or anything like that. Rather, the prices are calibrating to a more proper pricing, all things considered.

Tack on an upcoming set feature in PSA’s SMR magazine and you’re going to see prices evolve from basic to Stage 1. The trend will continue to be solidified. So what’s my advice? Buy now, if you haven’t already. If you’re going to sell, hold your cards. And if you’re simply a curious mind, watch as this set evolves into a whole different animal. This set is worth collecting and it is about to get the appreciation it deserves.